A visit to Economia – interview with Miloš Čermák

Miloš Čermák: Open spaces are the target of jokes, but they are functional and comfortable for the work we do

A whole range of professions are connected to Miloš Čermák; a commentator, author of short stories, columnist, consultant, university teacher and publisher. He was a reporter for Reflex magazine from 1991 to 2003, and the head commentator at Lidové noviny between 2003 and 2005. Currently, he is the editor-in-chief at iHNED.cz server and can enjoy the untraditional space in Economia, the publishing house located in Karlín, Prague, almost every day.

Let’s start with a question that comes from Václav Štrupl from Bonami as part of our relay: Hospodářské noviny now resides in Karlín in a huge open space office. He was interested to know what such a personality with a capital P thinks about this type of space? He imagined a person of your stature would have their own office. 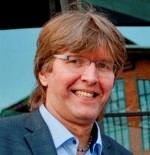 Over the last twenty-five years I’ve probably had all kinds of offices, starting with the madhouse operating day and night at the Alšovo riverside, where Reflex was based from 1991 to 1993 (part of the present-day Four Seasons Hotel), to Reflex’s sterile offices in Žižkov and Lidové noviny’s newsroom at Anděl. After four years on my own two feet as a businessman, I had my own office at Na Poříčí. It was a very lovely and convenient place and I was happy there. That being said, the present newsroom at Economia in Karlín is the nicest and most pleasant place I’ve worked over the years.

“It suits me aesthetically and functionally; it’s a good place to work and even the location is fine. Karlín has become an interesting neighbourhood over the last few years and it’s close to the centre. And regarding my height? A 207-centimetre-tall person simply can’t feel bad in an office that is 15 metres high.”

In terms of the office location, which would you choose? Holešovice, where you were based before, or Karlín? What were the advantages and disadvantages in terms of having offices in both locations?

“Economia wasn’t in Holešovice before, but in Letná, which a natural-born resident of Holešovice would distinguish. Letná is a lovely place, with a view and good accessibility, but Karlín is more lively these days and is more pleasant in some ways. Definitely more interesting businesses are opening here, such as restaurants, wine bars, pubs or cafeterias. And something is vanishing, which is part of it. Letná was taken back by its potential and stopped developing to its full.”

In your opinion, what are the advantages of open spaces? And from the perspective of the boss and the employees?

“Open spaces are generally complained about and is a popular topic that is subject to many jokes. When I first moved to the open space at Anděl to the new Mafra building, I was stressed out by it. But for the work I do, open spaces are simply a functional and comfortable arrangement for me, especially when it is executed so well as at Economia in Karlín, with its large area, excellent acoustics and its sufficient number of meeting rooms and so on. I think this is as true for the bosses as the rest. The disadvantages are obvious, the lack of privacy and worse working conditions for work that involves concentration, for instance. But I think the benefits prevail.”

The Economia headquarters in Karlín made it through to the short list in last year’s CBRE Meeting Room of the Year competition. What are your best contraptions or curiosities your office has at its disposal?

“I’ve already answered this, but if I were to pick one thing, it would be the so-called backstage, a place with natural greenery where you can sit with visitors or work on a laptop when you need to concentrate.”

Finally, you have the chance to pass the imaginary relay question to someone else. Who will it be?

“I’d ask the designer Martina Pištěláková. Her domain seems to be designing living spaces according to the show ‘How to Build Your Dream’. Do companies hire her? Or more precisely, are companies here used to hiring designers to design new meeting rooms, for instance?”

A visit to Economia – interview with Miloš Čermák