Demand by automotive suppliers will be at its highest in 2015 for the past five years.

CBRE, the global leader in the commercial real estate services sector, has issued a study monitoring the development of the demand for automotive suppliers in the Czech Republic. The study points out that many existing regions that are currently popular due to their proximity to the automobile manufacturers are not sufficient to satisfy the demand for automobile suppliers, which has reached record levels in 2015, forcing them to search for new places to locate their production.

The automotive sector made up almost one-third of inquires carried out for production and storage areas in the first half of the year. In addition, according to CBRE, this sector requires large spaces for rent this year.

We are constantly tracking the high demand of automotive suppliers for locations that have traditionally been in the scope of interest of foreign investors in this segment. New interest has also emerged for alternative locations, such as North Bohemia or Moravia. The labour market in these areas is not overly saturated and still meets key requirements – good infrastructure and existing industrial zones.

The largest centres of the automotive industry in the Czech Republic are Mladá Boleslav, Plzen or around the TCPA in Kolín and the Škoda Auto factory in Kvasiny, among others. Investors are becoming interested in new locations in North Bohemia or Moravia because existing industrial zones are largely occupied already. 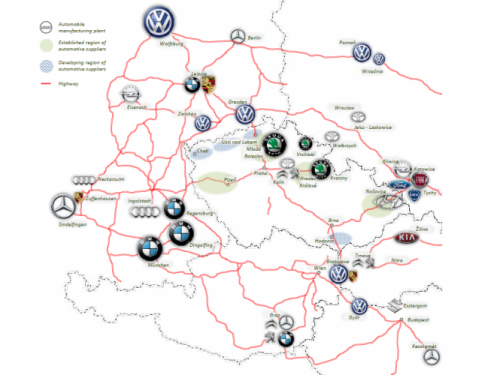 In addition to car plants in the Czech Republic, around which automotive parts suppliers are concentrated, there are also approximately 30 other foreign car makers in the region motivating suppliers to locate their production in their vicinity. These are mostly located in Germany, but also in Austria, Poland, Hungary and Slovakia. The automobile makers from the Czech Republic are very accessible and labour costs are three times cheaper in the Czech Republic than in Germany and Austria. (see the map for more details)