CBRE: Construction of offices in 2016 will fall to 2010 levels, only to see a significant recovery

According to a study by CBRE, the world leader in the commercial real estate services sector, the construction of office space will fall in 2016 by more than 2/3 when compared to 2013, ending up at the “after crises” level of 2010. This decline, however, will be short term, as construction will significantly increase in 2017 due to new projects. By the end of 2015, the construction of 190,000 sq m of office space is planned, while only 55,000 sq m is planned for 2016. CBRE predicts that this number could reach as high as 175,000 sq m in 2017.

In the short term, the construction of office space in 2016 will fall to 2010 levels, but will significantly recover in 2017 influenced by several new projects, for instance newly constructed Futurama, Butterfly and Five office units. The current overall conditions generally favour those tenants considering changing office space. In the last few years we haven’t seen such a wide range of buildings on the market and the possibilities offered by new office trends.

Office vacancy rates slightly fell in the second half of 2015 to 16.8%, but according 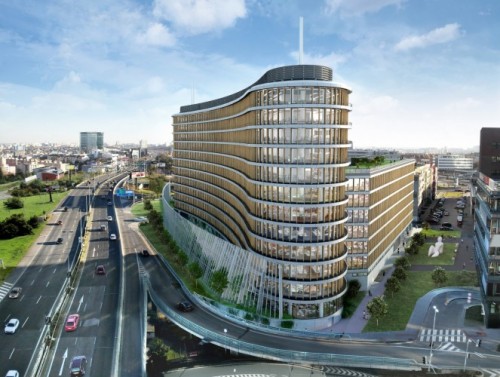 to market information, it will continue to fluctuate at around 17%. “The short-term decline in the vacancy rate is caused by the fact that some large companies have pre-leased new space while still occupying their existing ones. That’s why they appear twice in the statistics, thus lowering the vacancy rate. The real level of vacancy will be shown after the move and it will grow,” explained Katarina Wojtusiak.A positive trend has been noted in the pre-leasing of offices, which has doubled from last year to 40%.

CBRE: Construction of offices in 2016 will fall to 2010 levels, only to see a significant recovery