Richard Curran joined the Czech office of CBRE in 2004. Since becoming Managing Director in 2008, he oversaw the expansion of the CBRE business from the original leasing functions into a market-leading full scope commercial property consultancy business. Under Curran´s leadership CBRE acquired two companies through the acquisition of EMCM and Impact Corti and grew the business from 40 employees to almost 350 today.

“I have spent 16 fantastic years with CBRE and I am hugely proud of what we have achieved in the Czech Republic. However, it is the time for a change both for me and for CBRE now. I am convinced that the company will already have a brilliant successor in place in Clare Sheils,” commented Richard Curran, current Managing Director, CBRE Czech Republic. 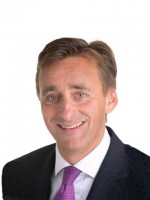 We thank Richard for his highly valued contribution to the success of our business in Czech over the past 16 years and wish him well in his future endeavours. I am delighted Clare is to take on the leadership role and her wealth of experience and deep knowledge of our business and clients means that she is ideally positioned to spearhead the continued growth and development of our Czech business.