GREEN POINT IS FOR SALE

THE ONLY OFFICE PROJECT WITH A BUILDING PERMIT IN ANDĚL 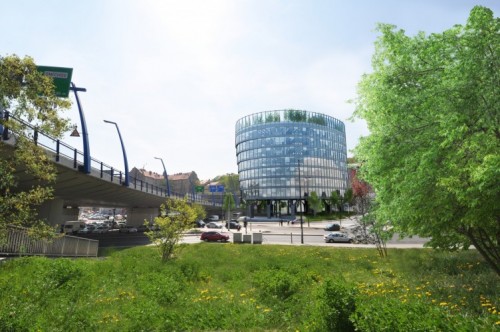 Prague, where the high level of interested tenants accounts for its low vacancy rates and thus higher rents that owners can demand from tenants (16 – 17 Eur/sq m/a month). The location is particularly popular thanks to the availability of good transport and, according to CBRE, it will play an essential role in the market for office space. At this time Anděl offers the only office project with a building permit for sale – Green Point.

“Projects with a building permit situated directly at a metro station or in its vicinity in prime office locations as the Green Point project is, are currently among the exceptional opportunities for developers. Many interesting projects were dealt with in the past 12 to 28 months, for example Metronom in Nové Butovice, City Deco and City Element in Pankrác or Corso in Karlín. That’s why we think that there will be great interest in Green Point by developers and we will manage to successfully do business with it this year.“

The project Green Point is the only one with a building permit in this vicinity to be introduced on the market this year. Therefore, it presents an unprecedented opportunity for developers to gain an office project in a very sought-after location. CBRE anticipates great interest in Green Point.

Development companies such as Skanska or Immorent have recently realized their new projects in Smíchov, offering a total of 164,500 sq m of modern office space in the vicinity of Smíchov-Anděl. CBRE anticipates that thanks to the favourable accessibility to transport hubs, this area will play one of the key roles in the Prague market for office space. From the long-term view, Smíchov is anticipating a revitalisation of the area around the former railway station. Thus, Smíchov will even out with its availability of office space on offer over the next 5 – 7 years in neighbourhoods such as Butovice – Stodůlky or Karlín.

GREEN POINT IS FOR SALE